Institute of Food and Agricultural Science

Gary Vallad, professor of plant pathology at the UF Institute of Food and Agricultural Sciences Gulf Coast Research and Education Center, studies microscopic organisms that cause diseases on plants. He focuses on pathogens that affect key Florida vegetable crops, especially tomatoes, and certain alternative crops, such as pomegranates and hops. His findings help growers identify diseases in their fields and control them with fungicides and other naturally occurring substances, such as plant extracts or microbes that feed on pathogens. Helping plant breeders develop new disease-resistant crop varieties is also central to Vallad’s work.

Vallad said that although pathogens appear to use “brute force” to cause an infection, the relationship between plant and pathogen is more like an intimate dance as microorganisms evolve to evade plant defenses and controls deployed by growers.

“You have to be a little bit twisted to be a plant pathologist – I’m one of the few that walks out to the field and sees a disease and smiles,” Vallad said. “Plants are very, very complicated organisms – just like human beings or animals – and it’s fascinating to me how a small microorganism can come in and thwart everything and cause utter chaos.”

According to the U.S. Department of Agriculture, Florida boasted nearly 50,000 farms and ranches spanning 9.7 million acres in 2019. But the state’s farmland is highly concentrated, Vallad said, meaning that certain areas are heavily farmed year-round. Diseases can spread quickly, aided by tropical weather that can damage large swaths of farmland. Hard freezes, which can kill harmful microorganisms and insects, are growing farther and fewer between in Florida.

“What growers deal with is kind of like gambling in Vegas. In this case, Mother Nature holds all the cards and growers just have to kind of live with whatever she throws at them and try to respond appropriately,” Vallad said. “I’m there to try to give them the best available tools to hedge the bet in their favor as much as possible.”

He is currently studying bacterial spot, a disease that kills leaves on tomato and pepper plants, resulting in reduced fruit production. Using DNA analysis, he and his team have traced up to 80% of Florida outbreaks to plant production facilities. Now, researchers are developing new ways to identify and remove infected plants before they reach a grower’s field.

“Once the disease is there, there’s not much you can really do to get rid of it,” he said. “That’s something we always tell growers: There are no cures, there are only preventatives.”

Vallad, who earned his master’s degree in crop and weed sciences from North Dakota State University and his Ph.D. in plant pathology from the University of Wisconsin, has won grants totaling more than $3.5 million and published nearly 100 peer-reviewed research papers. He said his passion for biology and the outdoors enable him to keep “one foot in the furrow” while studying plant disease problems. Today, he collaborates with plant experts across specialties, including growers, breeders and geneticists.

“Some of the greatest things I’ve enjoyed during my career are the interactions with people. That’s what makes it fun,” said Vallad, who has mentored more than 40 graduate students and interns and six postdoctoral researchers. “It’s not just the science, it’s the fact that you’re doing science with some great people.”

Learn more about the Gulf Coast Research and Education Center. 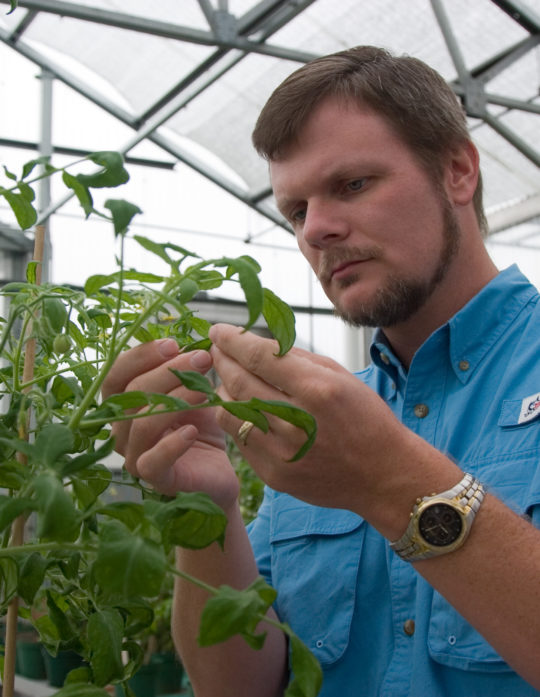