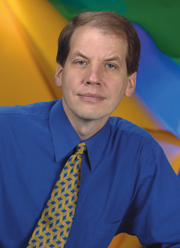 Mark Atkinson has forged a reputation as one of the world’s leading diabetes experts by conducting innovative research on the physiological changes that cause the debilitating disease.

“Pathologists are thought by many to be individuals who focus on details. They hang around the microscope and try to look at smaller and smaller images,” Atkinson says. “While there’s a time for doing that, there are also times when it’s better to take a step back and look at the whole picture.”

Atkinson views his role like this: Find what causes diabetes, predict who is at risk, then prevent the disease altogether.

“Mark has that unique ability to immediately think about the translation of basic science research, and he keeps his eyes on the big picture,” says physician Richard Insel, the Juvenile Diabetes Research Foundation’s excutive vice president of research. “I think he exemplifies exactly what you’d want to see in a Ph.D. who is conducting biomedical research. He goes beyond the day-to-day basic science results and thinks about the clinical applications. He’s always focused on how he can apply his biomedical research to the bedside.”

In 1987, fresh out of a graduate program in pathology at UF’s College of Medicine, Atkinson was among the first to show that administering insulin to mice genetically destined to develop diabetes could thwart the errant immune system’s battle to destroy insulin-producing cells in the pancreas.

Atkinson and his UF colleagues have spent most of the past two decades building an internationally regarded research program on the immunology of type I diabetes. They have extensively studied how to prevent and predict type 1diabetes. They scrutinized the genetics of the disease and launched newborn screening programs so treatment could be initiated earlier.

“We absolutely need to respond to the ever-growing threat of childhood diabetes, especially the recent trend of obesity in children, by finding a way to either reverse the disease or better than that, prevent it,” Atkinson says. “In a way, a perfect storm exists in terms of the combination of increased frequency, no easy means of prevention and the lack of public understanding and awareness of how bad diabetes is.”