Professor of Infectious Diseases and Pathology 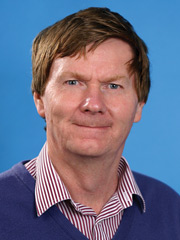 Molecular biologist Anthony Barbet’s research focus is on tick-borne diseases that pose a threat to livestock and wildlife in the U.S.

“These tick-borne diseases are a major impediment to livestock production worldwide, but have been little studied biochemically,” Barbet says. “Several of the tick agents are now known to also cause diseases in humans.”

Barbet has helped to develop a genetically engineered vaccine for heartwater, a disease which is considered a serious threat to livestock and wildlife in the United States. Heartwater attacks blood vessels, particularly in the brain, causing fluids to accumulate in the lungs, around the heart and in the chest and abdomen. There is no practical treatment for heartwater once the disease is evident. Once infected, up to 90 percent of susceptible animals die. The disease does not affect humans, horses or household pets such as dogs and cats, and it cannot be transmitted by eating meat or drinking milk from infected animals.

The DNA vaccine Barbet is developing still requires more testing in Africa and the Caribbean, but it will be much cheaper to produce on a commercial basis than the inactivated vaccine currently available.

Barbet says the single-cell protozoa and bacteria responsible for heartwater and other diseases employ a strategy of gene shuffling that makes it very difficult for an animal to generate a protective immune response.

“This has led to a new project, sponsored by the Wellcome Trust to modify genes of the tick-transmitted agents to see how this affects transmission,” Barbet says.