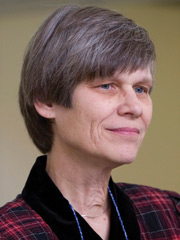 Over the past 15 years, Marylou Behnke and her research partner, Fonda Davis Eyler, have secured more than $8 million, primarily from the National Institute on Drug Abuse (NIDA) to conduct a longitudinal study of 308 children exposed to cocaine before birth.

The research has resulted in more than two dozen published research articles that have helped change how the world views these children.

In the early 1990s, most “experts” were predicting that these children born to crack-addicted mothers had no hope for a normal future. They would be brain damaged, unable to socialize with other kids. Some even called them a scourge on society.

But Behnke and Eyler thought that label was unfair. There was nothing to show exactly how exposure to cocaine in the womb would affect children.

Contrary to conventional wisdom, the researchers have found few differences between children who were exposed to cocaine and those who weren’t. Children exposed to cocaine actually had no greater risk of being born with birth defects than other children. Although cocaine-exposed babies faced a greater risk of being born prematurely and smaller, they showed no signs of withdrawal and behaved the same as infants who had not been exposed to drugs. They also discovered that the cocaine-exposed children seemed to fare better with their biological mothers as caregivers.

As toddlers, the children didn’t turn out to be the misbehaving brats some had predicted. But the researchers, whose NIDA grant has been renewed again and again, have found some subtle differences in how children exposed to cocaine plan and solve problems. A 2006 study found that the part of the brain responsible for decision-making seems to develop more slowly in drug-exposed children. The researchers discovered this by using a combination of magnetic resonance imaging and skills tests.

Behnke says that over the next five years she hopes to secure additional support from NIDA to continue the longitudinal study, looking at such things as neuroimaging, growth curve modeling, adolescent risk-taking behavior and drug use.