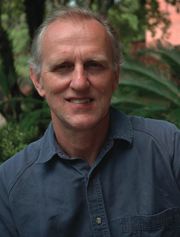 Geophysicist James Channell’s current research has him placed in the Southern Alps north of Venice, overlooking the Adriatic Sea …not a bad day job.

Channell researches paleomagnetism or fossil magnetism, in rocks and sediments in Italy and is using the method to study motions of “Adria,” a continental landmass surrounding and beneath the Adriatic Sea. The project aims to determine whether the motions of Adria are independent or tied to those of Europe or Africa.

“The more we look at this, the more it appears that this continental unit behaved as part of Africa for the last 200 million years or so,” says Channell, a professor in the Department of Geological Sciences.

Beginning in 2004, another of Channell’s projects took sail in the North Atlantic. From September to November of 2004 Channell was co-chief scientist aboard the Joides Resolution, a 400-foot, 10,000-ton drilling ship, designed to drill sediments or rocks in deep water.

“It has a dynamic positioning system that allows it to stay on site without being anchored,” he says. “It uses GPS technology and recoverable seafloor beacons to keep itself in position, and assembles drill string in 30 meter sections through water depths of several kilometers down to the sea floor.”

The objective was to collect sediment cores from places in the North Atlantic where high sediment accumulation rates yield high-resolution records of climate change.

“We wanted to look at high-resolution climate records during the last few million years,” Channell says. “My interest, magnetics, is involved because we use the fossil magnetism in the sediment to provide age control that cannot be provided at the required resolution by other means.”