David Leavitt, professor and internationally acclaimed novelist, was first published in the New Yorker a year before graduating with a bachelor’s degree in English from Yale University. Since then, Leavitt – also co-director of UF’s creative writing program – has published nearly 20 books, and his work has been translated into 22 languages. Leavitt’s next novel, Shelter in Place, is about the months after the 2016 election and will be available in the U.S. in October 2020.

“I don’t think there’s ever been a moment in my life where I haven’t wanted to write. And I know there are some writers older than me who have said that, at a certain point, they just stopped having that urge. But it hasn’t left me yet,” Leavitt said. “It’s how I function in the world – by seeking out stories and then writing them. Or, at least, trying to.”

Leavitt’s future plans include conducting research for two books. One is a fictional work set in Italy, spanning from 2017 to the region’s COVID-19 outbreak in March 2020. The other is a nonfiction book detailing the life of critic and media historian George W. S. Trow, who died by suicide in Italy in 2006. But, Leavitt said, much of his research is on hold due to travel restrictions.

“Travel has always, always been a very important part of research for me,” Leavitt said. “I think the main difference between researching for fiction and researching for scholarly writing and journalism is that, for fiction, it needs to be very unfocused – that is to say, a lot of the most interesting or useful material might be found accidentally.”

Leavitt, who is regularly published in journals, magazines and newspapers, said he has slowed down as a novelist in his four-decade-long career – partly because the world has become a more complicated place to understand.

“I think it’s especially tough these days because the world is so unstable right now. You can’t really say, ‘Oh, I’m writing about the present,’ because what is the present today will be the past tomorrow,” Leavitt said. “And now, when writing about times before COVID-19, I can’t erase the present from my memory.”

Leavitt said that he feels like a different writer with every book, adding that his eclectic writing style has ensured that his works don’t repeat themselves.

“I think most of the writers I admire – one thing about them is that when they write, you never know what you’re going to get,” he said. “And that’s the kind of writer I see myself as.”

Although Leavitt said it’s a quality that might have prevented him from building an identity, he didn’t linger on the idea.

“Every writer wants to be a different kind of writer than they are,” he said.

Leavitt is the editor of UF’s literary journal, Subtropics. UF’s creative writing program was also featured in the fall 2019 edition of Explore magazine. 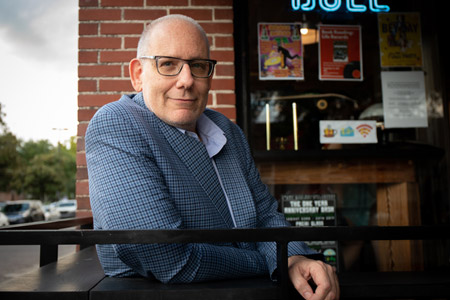