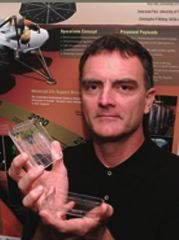 It may sound like something from a science fiction movie, but one UF researcher is making it happen.

“Plants growing in space experience a unique array of environmental impacts,” says Ferl, who also serves as the assistant director for the UF Biotechnology Program and director of Exploration Life Sciences at Kennedy Space Center. “You can imagine the incredible array of differential environments possible during spaceflight or in extraterrestrial habitats.”

Understanding the biological impacts of space missions to places like the moon and Mars is important not only for the intrinsic understanding of biology, but also because astronauts on long missions will need to grow plants to supply food. Space plants might also be used to filter wastewater, scrub carbon dioxide and produce oxygen.

To understand what happens to plants in space, Ferl and his team inserted a “reporter” gene into the Arabidopsis plant, a mustard plant that has been a part of the space program since the Gemini missions of the 1960’s.

By monitoring the color changes, Ferl can observe and pinpoint specific stresses and adjust the plant’s growing environment.

Because of Ferl’s accomplishments in the area of plant biology and space exploration, he was asked to serve on the Science Council of the Universities Space Research Association, and was the only plant molecular biologist appointed by NASA to be a member of the Lunar Exploration Analysis Group.