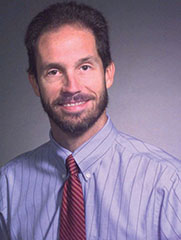 Pain, says Roger B. Fillingim, is arguably the most pervasive public health problem facing our society. Fillingim, an associate professor of community dentistry and behavioral science, studies how pain perception differs between the sexes, between ethnic groups, and between individuals. Understanding the hows and whys of such differences in pain perception will pave the way for tailored treatments that will more effectively relieve pain.

Fillingim’s findings show that women are more sensitive than men to repeated or prolonged pain. His research also suggests that the factors that contribute to increased pain sensitivity may differ for women versus men. For example, sex hormones can influence pain perception in women.

Genetic factors also play a role in pain. Fillingim’s group recently found that a particular gene, known as the “redhead gene,” affected how much pain relief was produced by a particular drug only in women. Another gene is linked to pain perception only in men.

“We’ve known for some time that there appear to be differences in the way men and women respond to certain painkilling drugs,” says Fillingim. “The findings of our study are significant because we have now demonstrated that there are, indeed, different biological pain modulation processes at work in women than in men and that a specific gene seems to control these processes.”

A new long-term project will examine whether pain sensitivity, genetic factors, nd psychosocial variables can be used to predict the development of facial pain due to temporomandibular muscle and joint disorder. Fillingim expects this research to help identify risk factors in other chronic pain disorders.

“The ultimate goal would be to do a blood test on somebody, look at their genetic makeup as well as other chemical, biological, physical and phsychological characteristics, plug all that information into a computer, and the computer would print out a sheet that says, ‘Okay, this drug, at this dose, is going to provide this patient the best relief from pain,” says Fillingim.