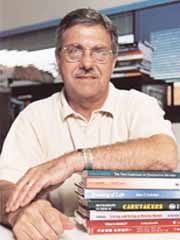 Jaber F. Gubrium, a professor of sociology in the College of Liberal Arts and Sciences, is one of the world’s leading qualitative methodologists. Gubrium works empirically at the border of ethnography and narrative analysis. These are well-established methods of procedure in the social sciences, which are being combined in new ways to deal with the perennial problems of linking together observational data with transcripts of stories, speech, and other narrative material.

This has been applied in a long-standing program of research on the social organization of care and treatment in human service institutions. Gubrium’s pioneering work on the everyday practice of caregiving in nursing homes, originally described in his now-classic research monograph Living and Dying at Murray Manor, for the first time presented the details of caregiving from the perspectives of the residents and the staff. The research showed that, while administratively the nursing home was a single organization, it was divided in practice into multiple worlds of care in the experience of the participants. This served to complicate the meaning of the quality of care so that no single metric was applicable. Since then, special attention has been paid to caregiving and the cognitively impaired, in particular how the Alzheimer’s disease movement transformed the meaning of senility, which is reported in the book Oldtimers and Alzheimer’s: The Descriptive Organization of Senility. With the support of the National Institute on Aging, the research has been extended to the analysis of residents’ life narratives, focusing on the way these accounts both specify and ramify the meaning of care. These results have been published in Speaking of Life: Horizons of Meaning for Nursing Home Residents.

The program of research has extended to institutional practices across the life course. Ethnographies of several institutional settings have set the basis for comparison. Earlier research on interpretive practices in a residential treatment center for emotionally disturbed children has been followed by ethnographic and narrative studies of clinical practices in a physical rehabilitation hospital, a psychiatric hospital, family counseling, and self-help groups for home caregivers. This has added significantly to the emerging research genre called “institutional ethnography.”

Gubrium is the editor of the Journal of Aging Studies and serves on numerous editorial boards. He is a regular keynote speaker at international conferences and has been invited to lecture at several North American and European universities. The significance of his many contributions has been recognized by the American Sociological Association, whose Section on Aging named him its Distinguished Scholar in 1996.