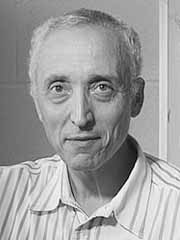 The optimization methodology he uses combines various mathematical techniques to create computer simulations for testing designs. These simulations are often expensive, so Haftka develops shortcuts to get the most out of each experiment.

Haftka has pursued numerous research initiatives since arriving at the University of Florida in 1995, including an innovative study of bone to develop new engineering structures.

Haftka also launched UF’s highly successful program in miniature unmanned aerial vehicles known as MAVs. He has collaborated with colleagues and graduate students in the study of the aerodynamics, control and performance of these aircraft, which have numerous military and civilian applications. He also initiated a national competition for designing the smallest operational MAV.

Haftka has produced extensive documentation of his research, co-authoring two books, including Elements of Structural Optimization, the field’s leading textbook, now in its third edition. Haftka has collaborated with more than 100 colleagues on more than 160 journal articles, 260 conference papers and reports.

Haftka considers his most important duty, however, to be as an educator and mentor to his students. Many of the graduate students Haftka advises have traveled across the globe to learn from him. He regularly offers his students the opportunity to travel with him or in his place to important conferences.