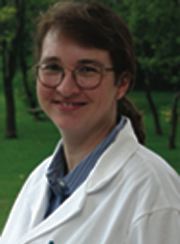 Carrie Haskell-Luevano is a chemist and associate professor of medicinal chemistry who studies obesity through the behavior of the endocrine system.

The melanocortin peptide hormones (a specific endocrine system) in the brain and periphery is her milieu, and leads to clues about feeding behavior and obesity. Haskell-Luevano and her team are trying to figure out the proteins in the brain that are involved in making us want to eat.

“One of the neat things we’ve found recently is that in obese. genetically modified mice, voluntary long-term exercise results in a normal body weight and corrects for overeating,” Haskell-Luevano says of a study funded by the American Diabetes Association. In other words, in mice prone to be overweight, long term exercise cancels out the tendency for obesity and diabetes.

Haskell-Luevano and her team also have created molecules patented by UF as potential therapeutics for suppressing appetite.

“We’re interested in developing biological tools and understanding how the endocrine proteins interact,” she says.

For Haskell-Luevano, working with great scientists – and training future scientists – is the most rewarding part of her research.

“Dr. Haskell-Luevano’s research is relevant to understanding and treating obesity, a significant health problem of our times,” says Margaret James, professor and chair of the Department of Medicinal Chemistry. “She has been praised for her productivity and innovative approach to understanding the melanocortin receptor system.”