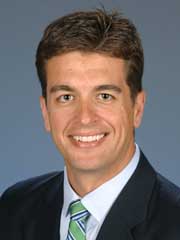 Any athlete who has ever been psyched up (or psyched out) before a game has experienced the link between emotional stress and physical performance.

As director of the Performance Psychology Laboratory, Christopher Janelle and his students study the effects of stressful conditions and emotional reactivity as they relate to the health and performance of athletes, as well as individuals who suffer from movement and emotional problems.

Janelle takes a unique multidimensional approach to understanding how emotion, attention and movement are related in health and human performance, and his lab uses a variety of methods to address these issues. For example, using measures of heart rate, brain activity and eye movements, Janelle discovered how a person’s ability to pay attention changes under stress, and why, when considering these psychophysiological indices, it becomes more difficult to tune out meaningless distractions.

Janelle also found that accomplished athletes, drivers and marksmen, while somewhat affected, are less likely to be hindered by these attentional problems. In other words, one thing that likely separates the good from the best is not physical talent, but mental clarity as a result of superior emotional regulation.

Janelle doesn’t limit his studies to experts and athletes, however. Another part of his research focuses on emotional reactivity among people with anxiety problems and poor body image. His work in this area has determined that the way people with body-image problems look at the body, also known as their visual search pattern, differs from people with healthier body images.

In addition to these studies, Janelle has also investigated the link between emotions and basic motor function. This research expands to understanding the emotional problems of people with motor disorders such as Parkinson’s disease, and the physical problems faced by people with emotional disorders.

In the past five years, Janelle has received grants from the National Institute of Mental Health, the American Heart Association and the National Science Foundation. He has published over 50 scientific articles and book chapters, and co-authored the Handbook of Sport Psychology.