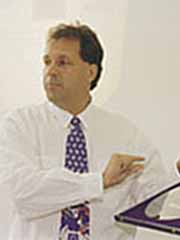 Mark Law is designing computer simulations that will help industry develop the next generation of microprocessors.

Law says ever-shrinking microprocessors are becoming increasingly vulnerable to impurities introduced during the manufacturing process that can cause the chips to fail. Process modeling software Law has been developing since he was a graduate student at Stanford allows manufacturers to test their systems without having to waste expensive real materials.

The first process modeling program Law developed in graduate school was rewarded in 1992 with one of only 15 National Science Foundation Presidential Faculty Fellowships presented nationwide. FLOOPS, Florida Object Oriented Process Simulator, which Law developed after coming to UF, is now in use at more than 50 research facilities around the world and received the 1993 Semiconductor Research Corporation Technical Excellence Award.

To address the needs of the semiconductor industry, Law and fellow UFRF Professor Kevin S. Jones of the Department of Materials Science and Engineering developed and now serve as co-directors of UF’s SoftWare and Analysis of Advanced Material Processing (SWAMP) Center. With the goal of becoming an industry leader in silicon processing, this interdisciplinary center currently is supported by nearly $1 million in funding from such important trade organizations as the Semiconductor Research Corporation and SEMATECH. The center hosts an annual research conference that is well attended by scientists in the field.