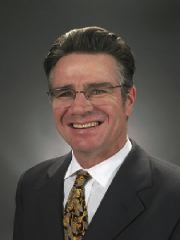 Chemistry professor Charles Martin’s research has been intense since he arrived Gainesville in 1999.

“The last five years have been the most scientifically productive of my 24-year career,” Martin says. “This general area of my research group – bio/nano science and technology – is arguably one of the most important in modern science, and this is one factor that makes the work so exciting.”

The group, comprised of 21 researchers, is particularly interested in nanotube membranes. These are synthetic membranes that contain a parallel collection of nanotubes. His group has pioneered a powerful new method to prepare nanomaterials called the “template method.”

This method involves using the nanoscopic pores in a host membrane as templates to prepare nanoscopic particles of a desired material.

“We are exploring applications of these nanotube membranes in chemical analysis and in membrane-based chemical separations,” Martin says.

For example, they have shown that these membranes can be used as filters to cleanly separate small molecules on the basis of molecular size. They are also using these nanotube membranes for protein separations.

Martin also is interested in electrochemical energy production, and nanomaterials play a major role in the research efforts. His team is now investigating new nanostructured electrodes for the type of battery that powers modern laptop computers and cell phones.

His group has shown that because of the high surface area of nanomaterials, the electrode can support much higher discharge currents without loss of battery capacity.

“He is a highly visible and productive member of our department and a campus force in the area of bio-nano sciences,” says David Richardson, professor and chair of chemistry. Martin is also the recipient of the Electrochemical Society’s Carl Wagner Memorial Award. This award is given once every two years to only one scientist worldwide.