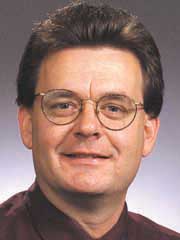 Fashioning nanoscopic wires out of the key ingredient in sunblock may seem impossible, if not downright ridiculous. For David Norton and the world of nanoscience, it is both a new frontier and just another day at the office.

Norton’s research is focused on the use of metal oxides, a group of chemical compounds that contain an oxygen atom and some other element. Some of the most popular oxides include such diverse compounds as iron oxide (rust), nitrous oxide (laughing gas) and zinc oxide (an active ingredient in sunscreen).

Norton first became fascinated with oxides as a postdoctoral fellow at Oak Ridge National Laboratory in Tennessee, where he and his colleagues created to way to synthesize flexible wires from brittle oxides, Norton said.

“That technology is now the centerpiece of the U.S. Department of Energy superconductivity program, and is being commercialized by several companies,” he said.

In the eight years since Norton came to UF, he and his lab have developed even more uses for oxide compounds.

His zinc oxide nanowires can detect hazardous gases and biological molecules. He and his lab have also created optically transparent transistors and nanoscopic sensors to identify photons, hazardous chemicals and toxins. In addition to studying the properties of numerous existing oxide materials, he and his lab have also been able to create some of their own oxide materials.

Due to his passion for nanoscience, Norton has been a catalyst for the progress of UF’s Nanoscience Institute for Medical and Engineering Technologies (NIMET) and the Nanoscale Research Facility (NRF). These facilities, Norton said, “are enabling resources for future research success here on campus.”

Materials science and engineering Chair Kevin S. Jones sees a bright future for both Norton and the facilities he helped make possible.

“David will have incredible opportunities to lead interdisciplinary research between himself and collaborators from physics, chemistry and medicine. His work in oxide materials will continue to play a critical role in cutting edge research for years to come,” Jones said.