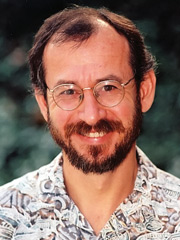 “We live at a critical time for biodiversity,” says malacologist Gustav Paulay. “Human activity is causing profound alterations in the biosphere, and the resulting mass extinction is already erasing much of our biological heritage. Documenting life on Earth now is one of the most relevant research endeavors our generation can undertake.”

Focusing on the Indo-West Pacific (IWP), with special interest in Oceania, Paulay conducts marine biodiversity surveys to document the biodiversity of the area with photographic, genetic and morphological information. Survey targets are macroinvertebrates, especially cnidarians, mollusks, crustaceans and echinoderms, and, to a lesser extent, sponges, larger worms, brachiopods and ascidians.

“These efforts have led to a better understanding of speciation, and to the discovery and characterization of many new species missed by studies on preserved, museum specimens,” Paulay says. “We are pursuing systematic revisions on some of these taxa, using combined field, museum and genetic taxonomy.”

As part of this effort, Paulay is conducting a $750,000 National Science Foundation-funded effort to describe and analyze the diversity, distribution and evolution of sea cucumbers, especially on coral reefs.

In 2004 Paulay and his group showed for the first time that the Atlantic coral reefs are very different from those in the Pacific, and that the many similarities between the two resulted from convergent evolution rather than evolution from common ancestors. “A startling result when it first appeared in the journal Nature,” notes Scott K. Robinson, chair of the Department of Natural History.

Although evolution has taken place over millions of years, Paulay believes the chance to document the history of biodiversity is slipping away.

“As species are lost over time, our ability to document the pre-human biosphere decreases,” he says. “Present efforts are irreplaceable.”