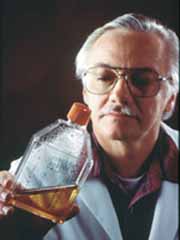 Ammon Peck is an internationally renowned researcher whose current work examines the underlying causes of disease and the prevention of disease processes. Peck is a pioneer in the study of bone marrow transplantation for the treatment of autoimmune conditions such as diabetes.

Peck presently maintains three active research programs. The first program concerns diabetes and its autoimmune basis through stem cell biology. Science declared stem cell research the most important breakthrough in 1999. Peck has demonstrated that autoimmune diseases may be prevented by altering the genetics of the host’s bone marrow using a bone marrow transplantation procedure that involves growing hematopoietic (blood forming) stem cells in vitro. Peck’s findings also warn of the potential to transfer autoimmune diseases to recipients through bone marrow transplantation. In addition, he has demonstrated the ability to reverse diabetes with islets grown in vitro from pancreatic stem cells.

The topic of Peck’s second area of research is Sj”gren’s syndrome, a disorder characterized by dryness of the mouth and eyes. As part of this work, Peck and co-investigator Michael Humphreys-Beher of the College of Dentistry developed the nonobese diabetic mouse (NOD) model, an animal model that has characteristics remarkably similar to those in humans with insulin-dependent diabetes. The NOD model has been recognized as “the most appropriate animal model of the human disease Sj”gren’s syndrome.” The team of Peck/Humphreys-Beher has published 13 major papers during the last five years.

Peck’s third area of research focuses on hyperoxaluria, a condition that, if left untreated, may lead to kidney failure or even death. Oxalate is a chemical formed in the body as a waste product, and its excessive accumulation can damage kidney tissue. Peck’s research in this area has demonstrated the importance of the gut-associated bacterium Oxalobacter formigenes in regulating the homeostasis of oxalate in both humans and animals. Peck’s is one of only a few laboratories worldwide investigating this bacterium.

In 1995, Peck co-founded Ioxin Biotechnology to commercialize research in hyperoxaluria and diabetes.

Peck’s work has been published in such leading journals as the Journal of Clinical Investigation and the American Journal of Physiology. He has been invited to present his research at international meetings and to major pharmaceutical companies worldwide.