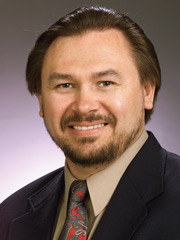 Researchers have long known that lightning produces lots of nitrogen oxide. Power plants and cars also give off the gas, which is a big ingredient in smog.

Now, a group of researchers led by Vladimir Rakov, a UF professor of electrical and computer engineering, have made the first direct measurements of the amount of nitrogen oxide produced during an actual lightning strike – a feat likely to be important in separating human and natural contributions not only to air pollution, but also to global warming.

Rakov and colleagues from UF and Uppsala University in Sweden triggered lightning by firing wire-trailing rockets toward storm clouds at UF’s lightning research and testing center in rural North Florida.

Using a metal rod, they directed this lightning into a sealed chamber that contained another metal rod less 3 centimeters away. After the lightning “jumped” between the rods, the engineers pumped out the air in the chamber and analyzed it, measuring the precise amount of nitrogen oxide produced.

When produced by human activities, nitrogen oxide is a byproduct of combustion by automobiles, power plants and other sources.

At low altitudes, it is the principal ingredient in smog. Higher up, in the upper troposphere and stratosphere, nitrogen oxide plays a role in regulating ozone, which at that altitude acts as a greenhouse gas.

While it is not surprising that the engineers discovered nitrogen oxide, their findings do upset the conventional wisdom in an important way, says Rakov.

Atmospheric scientists had long believed that lightning produced the most nitrogen oxide during the so-called “return stroke” phase, when lightning moves from ground up into a cloud.

The results could mean that the models atmospheric scientists have been using to determine the amount of lightning-produced nitrogen oxide need to be adjusted.