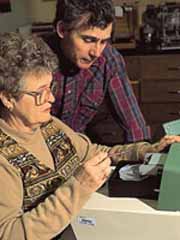 Neil Rowland studies the brain mechanisms underlying food and fluid intake. Through experiments to either induce or inhibit intake of water and sodium in rats, he has been able to determine the regions of the brain in which a certain class of genes and their protein products, particularly one called Fos, are expressed. This has led to the development of “functional maps” of thirst and sodium pathways in the brain.

Sodium also figures prominently in another research interest for Rowland – the role different levels of salt intake before and shortly after birth play in the development of high blood pressure later in life.

Another line of research for Rowland concerns the signals that turn off feeding – so-called satiety signals – and ways in which these might be used as targets for appetite-suppressant or anti-obesity medications.

Rowland has conducted many years of research with the appetite suppressant dexfenfluramine. Since this drug targets a specific neurotransmitted system (serotonin) in the brain, it is a useful tool for evaluating the role of serotonin pathways in eating behavior.

Dexfenfluramine was taken off the market in 1997 after reports of heart disease in patients who took it with another drug, phentermine, but Rowland continues to research the effectiveness of chemically similar neuropeptides on appetite suppression.