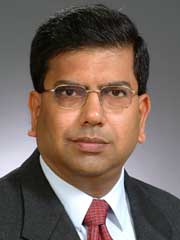 By studying the individual components of a structure, Bhavani V. Sankar can predict the properties of the whole from the sum of its parts.

In doing so, he can feel out a material’s greatest strengths and, more importantly, its hidden weaknesses. His research has resulted in a novel theory and a new system for his field, micromechanics.

Sankar’s micromechanical models, which have been applied to aerospace projects, vehicles and armor, are used to predict the behavior of cellular materials, laminated and layered materials, and textile composites. Even small stresses within the microstructure of these materials can cause the whole system to fail, which is why it’s so important to predict the effects of stress.

In response, Sankar developed his Stress Gradient Failure Theory, which accounts for various stresses on the components of a structure. He has since used his technique for an Army project that would result in more efficient armor and lightweight automobiles.

In a second project, Sankar is studying the effects of weight and heat on micromechanical models, a theory called Integral Thermal Protection System that he is developing in collaboration with another professor. His work in this area has been applied to airplanes to safely increase their load capacity. Sankar also has a grant from NASA to study heat barriers for gas turbine engines.

Mechanical and aerospace engineering Chair S. Balachandar has praised Sankar for both his research and teaching ability.

“Bhavani’s work is characterized by steadfastness, dedication to nurturing his graduate students, and extensive interactions with colleagues,” he said.

“His research put the University of Florida on the world map of places of excellence in the predictions of response of complex structural materials to mechanical and thermal loads.”