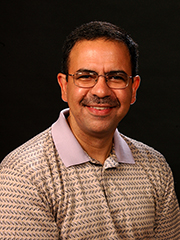 Ata Sarajedini has become an internationally recognized authority on the formation and evolution of galaxies.

He is principal investigator on a $550,000 grant from the Hubble Space Telescope Treasury Program to use the telescope to take images of star clusters and create an archive of observational data and digital images to be used by astronomers for decades to come.

“Access to this telescope is fiercely competitive, and only about 10 percent of proposals are successful,” says astronomy department Chair Stanley Dermott. “Ata has an international reputation for his research on the origin and evolution of galaxies and the distance scale of the universe. This new project will be a major resource for future astronomers.”

Along with a 10-member team of international scientists, Sarajedini is using the Hubble telescope to capture images of 66 globular clusters within our galaxy.

“The stars in these clusters are thought to be the oldest in the Milky Way,” Sarajedini says. “By studying them we hope to learn about the formation chronology of our own galaxy and the age of the universe. The orbits of these clusters allow us to measure the mass of our galaxy, akin to placing the Milky Way on a huge balance scale.”

Sarajedini first became interested in star clusters as an undergraduate majoring in astronomy and physics at Yale University. After graduating with his bachelor’s degree in 1986, he decided to stay on at Yale for graduate school. After completing two postdoctoral appointments, first as a Kitt Peak National Observatory Fellow and then a Hubble Fellow, Sarajedini served two years as an assistant professor at Wesleyan University in Middletown, Conn., before coming to UF in 2001.