Professor of Entomology and Nematology 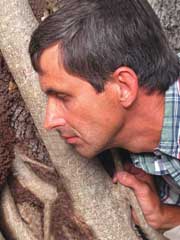 Rudolf Scheffrahn knows termites and how to kill them, and he has used that knowledge to tackle a far more dangerous pest – anthrax.

Scheffrahn is an international authority on drywood termite control and structural fumigation. His database of 17,000 termite colony samples is larger than the Smithsonian Institution’s and has proven invaluable in his development of hypotheses about the historic origins of New World termites.

Scheffrahn’s research has led to new treatment and prevention techniques for drywood termites and has resulted in major modifications in the labeling of Vikane, a common termite fumigant.

In response to the anthrax attacks of 2001, Scheffrahn and a colleague patented the use of methyl bromide for remediation of buildings contaminated with anthrax.

“Tests indicate the fumigant, used for more than 50 years to control insect pests in buildings, grain elevators and fresh fruit, is a better option than current treatments such as chlorine dioxide for killing anthrax and other bacterial spores,” says Scheffrahn, who has studied pest control fumigants for more than 15 years.

Scheffrahn and graduate research assistant John Warner also have developed a bait that is highly attractive to the tiny, white-footed ants that have become a major nuisance in South Florida.

In 1998, Scheffrahn was recognized for his research on urban entomology with the Orkin National Research Excellence Award and in 2002 he was selected “Entomologist of the Year” by the Florida Entomological Society.