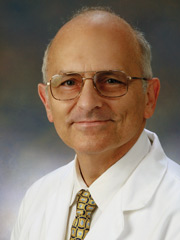 Cardiologist David Sheps has shown through a variety of studies over the past five years that mental stress can markedly decrease blood flow to the heart, hiking heart disease patients’ risk of dying three-fold.

“That’s a pretty powerful increase in risk,” says Sheps, associate chief of cardiovascular medicine in UF’s College of Medicine. “That’s a magnitude of difference similar to that posed by any other major risk factor for heart disease, such as cigarette smoking or high cholesterol.”

One of Sheps’ studies – funded by the National Heart, Lung and Blood Institute – was the first to single out an independent association between mental stress and death.

Scientists evaluated 196 patients who had documented coronary artery disease. Each patient received two nuclear studies, one under normal conditions and one during a psychological stress test that required them to speak for five minutes about a hypothetical situation involving a close relative who was being mistreated in a nursing home. The study showed abnormalities associated with ischemia (decreased blood flow) in a fifth of the patients; most were women, and more were likely to have diabetes.

Later, researchers contacted study participants or their relatives by telephone and reviewed Social Security records to determine how many had died within five years of the study’s completion. They found that patients who’d shown abnormalities during the speech test were three times more likely to die than their counterparts without abnormalities. Of the 17 patients who had died, nearly half had new or worsened abnormalities during the speech test, compared with only 19 percent of the survivors.

Sheps continues to study the relationship between stress and heart disease, saying “We need to learn what can be done to reverse this kind of stress response. Can you treat patients in some way to prevent them from having psychological stress-induced ischemia? Can we develop an easy test that could be used routinely to identify these patients who have three times the death rate of other patients?”