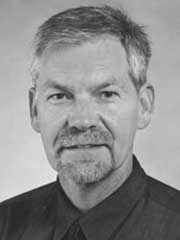 Tumor biologist Dietmar Siemann is looking for new ways to stop cancer at its source.

As associate chair of the radiation oncology department, Siemann has focused on developing novel approaches to the treatment of cancer.

Through his research, Siemann seeks to destroy tumors by targeting and eliminating the tumor’s blood supply. One approach used molecules that inhibit the ability of tumors to grow new blood vessels. Another approach seeks to destroy the blood vessels already existing in tumors. Either way, the outcome is the same: the tumor dies due to lack of nutrients.

Studies in Siemann’s lab have shown that these agents have the ability not only to severely damage tumors when used on their own but also to markedly increase the antitumor effects of chemotherapy or radiation therapy when used in combination with these traditional anticancer treatments. Based on such preclinical studies, several lead blood vessel targeting agents have now entered clinical evaluations in cancer patients.

Siemann used his expertise to edit the book Vascular Targeted Therapies in Oncology, which was recognized by the British Medical Association in 2007.

In an effort to make the most progress in providing new cancer treatments, Siemann has worked to bring basic and clinical scientists together. He has been instrumental in developing ‘bridging meetings’ at Shands Cancer Center to bring these two key groups together to study the newest treatment strategies.

In 2006, Siemann received UF’s School of Medicine Basic Science Research Award for his efforts in novel treatments of cancer.