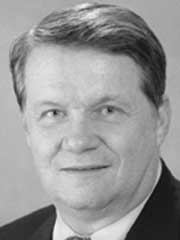 During his two decades on the UF faculty, Karl-Johan Söderholm has made many significant discoveries in the prevention and treatment of dental diseases. In recent years his research has focused on two areas: the wear of composite fillings and the development of better dental bonding materials.

His research on bonding materials resulted in a new bonding material that is currently being evaluated for its effectiveness. He and his colleagues also found that small variations in technique, such as how long a bonding agent is exposed to air, can result in much better bonds.

Söderholm’s research over the last five years has resulted in more than $1.5 million in grants. During this period he has authored or co-authored 45 scientific papers and 10 book chapters.

“Dr. Söderholm is a superb researcher and team player who has served as a role model for researchers at the University of Florida,” says Dr. Kenneth Anusavice, chair of the Department of Dental Biomaterials. “He exemplifies the highest standards for an academic scholar.”