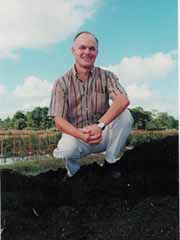 When Peter Stoffella looks at waste, he doesn’t see a problem, he sees an opportunity.

A horticulturist, Stoffella takes biodegradable waste by-products and finds a use for them growing crops.

Stoffella’s research has led to the use of waste by-products to control weeds and enrich the soil. As a result, fewer chemical weed killers and inorganic nutrient fertilizers must be added to the soil, which cuts down on potential water contamination.

Because of the fragile nature of the state’s groundwater supply, the potential reduction in nutrient run-off is key to Stoffella’s work, says Walter J. Tabachnick, interim director of the Indian River Research and Education Center.

However, reducing potential groundwater contamination is not the only advantage to Stoffella’s work.

Reusing waste by-products in crop production aids growers by providing them more economical ways to improve soil conditions. It also opens markets for the producers of organic by-products and reduces the amount of waste sent to municipal and private landfills.

Funded by the Florida Department of Environmental Protection, Florida water management districts, the U.S. departments of Agriculture and Energy, Stoffella and his colleagues have received more than $1.5 million in grants for various projects.

Stoffella’s latest work is with sediments dredged from the Indian River Lagoon. The researcher is assessing the sediment for potential uses and potential hazards.

In addition to research, Stoffella and a co-editor published a book in 2001, Compost Utilization in Horticultural Cropping Systems, that Tabachnick hailed as a “major contribution to his field.”

Stoffella “brought together the leading scientists in this field and provided the kind of oversight to produce this important addition to the literature,” Tabachnick says. “It is the only book of its kind providing scientific information on compost production, use, benefits and potential hazards.”