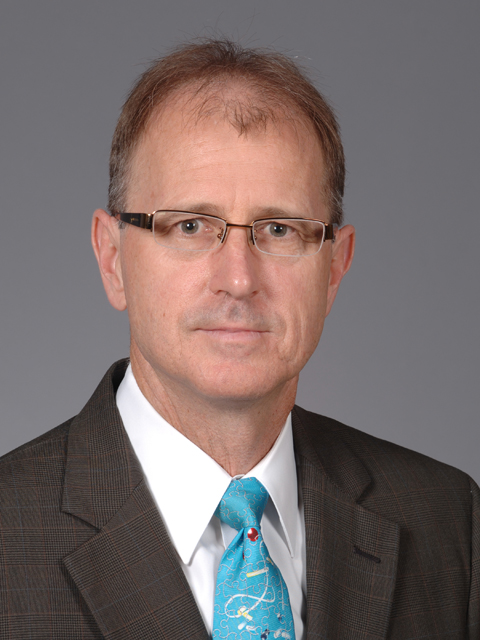 Daniel Talham’s research focuses on materials discovery. Centered on the chemistry of inorganic materials, he studies coordination polymers for advanced materials applications and inorganic surfaces for controlled interactions with biomolecules.

Coordination polymers are inorganic solids in which the metal atoms are linked together by typically small organic molecules to form extended networks. Relative to more common inorganic materials, coordination polymers provide opportunity to impart new behavior by mixing organic and inorganic components in the same material. Such compounds add attributes such as porosity, flexibility, and optical switching to the more traditional magnetic, semiconducting or metallic behavior of conventional inorganic solids.

Over the past few years, Talham and his colleagues have explored ways to control the architecture of coordination polymer solids at the nanometer length scale, leading to heterostructures that combine different materials with exquisite control. Using these techniques, they recently discovered a new mechanism for controlling magnetism with light. First discovered in thin films, the same phenomenon was then demonstrated in nanoparticles. Magnets that can be switched with light are expected to be part of new strategies to extend the density of magnetic information storage beyond conventional limits.

Inorganic surfaces that bind biomolecules in a controlled fashion are needed in several bioanalytical applications, ranging from clinical testing kits to DNA or protein chips, and must be part of essentially any scheme for applying nanotechnology to biomedicine. Talham developed routes to thin film coatings of coordination polymers that will selectively bind phosphorylated biomolecules. Originally applied to immobilizing oligonucleotides for DNA arrays, the surface chemistry can also be applied to proteins. More recently, the Talham lab extended the idea to nanoparticles by developing coordination polymer MRI contrast agents that exhibit the same selective binding of phosphorylated biomolecules.

Talham’s discovery of a new class of light-controllable magnets is the centerpiece of an Interdisciplinary Research Group in the new University of Florida Center for Tomorrow’s Materials, which he currently directs. In addition, some common synergistic effects observed during studies of the photomagnetic heterostructures and the heterostructures for lithium ion storage are leading to a new understanding of coordination polymers at the mesoscale.