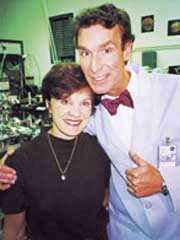 Debbie Treise is trying to teach journalism to scientists and science to journalists in an effort to improve how both communicate with the public.

Toward that end, NASA has awarded Treise more than $600,000 to help its Marshall Space Flight Center in Huntsville, Ala., communicate science more effectively.

As part of the Marshall project, “Communicating Science Knowledge: A Strategic Research Alliance,” Treise surveyed 510 members of the National Association of Science Writers. The respondents cited lack of science literacy and a low overall interest in science among students and the general public as their biggest concerns.

Treise, shown here with the star of PBS’ popular “Bill Nye, The Science Guy” program, also is spearheading the development of a new specialization in science and health communications within the UF College of Journalism and Communications’ existing master’s of communications program. The acceptance of scientists into the program will make it unique among similar programs at other universities. Treise says one focus will be on national and state policy issues surrounding science communication. The program hopes to produce scientists, public affairs officers, public information officers and journalists who are savvy in both science and communications.