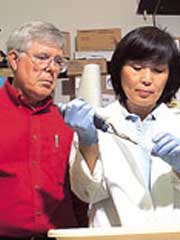 Don Walker, a professor of neuroscience in the College of Medicine and director of the Center for Alcohol Research in the UF Brain Institute, is widely known for his research on the neurobiology of alcoholism.

He has shown that moderate blood alcohol levels in laboratory animals can cause damage to an area of the brain that affects memory and learning, called the hippocampus.

Walker and his colleagues are investigating the role of molecules called neurotrophic factors and their production and interaction in preventing cell death caused by alcohol abuse. Walker, who holds a joint appointment as a career research scientist at the Gainesville Veterans Affairs Medical Center, is investigating whether cell death from chronic exposure to alcohol can be prevented, and possibly reversed. “Dr. Walker is recognized by his peers locally, nationally and internationally for his careful and innovative research, and the consistently high quality of his research program has brought prestige and recognition to the department, the college and the university,” said Doug Anderson, chairman of neuroscience.