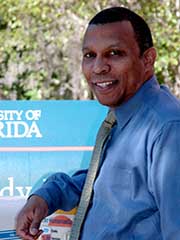 The right to refuse to testify allows journalists to keep their sources confidential. The strength of that right, however, differs across the country. Laurence B. Alexander’s work on press privilege has turned him into an authority in the field.

So influential is the journalism professor’s work that it has been cited and used in various scholarly law reviews and in state and federal appellate courts.

The implications of his work go beyond the legal and into legislative and public policy arenas. For example, an article published in the Yale Law & Policy Review analyzed the difficulties that courts and policymakers have in deciding just who should be protected by the journalist’s privilege.

The varying levels of effectiveness and strength of laws meant to shield journalists in different states form the core of his work. Alexander says that his “publications continue to build on research started several years ago examining the application of the press privilege to instances when press freedom is threatened.”

William McKeen, chair of the Department of Journalism in the College of Journalism and Communications, says that “the inclusion of [Alexander’s] works in leading national peer-reviewed publications, such as Free Speech Yearbook, and noted scholarly law reviews, such as the Yale Law & Policy Review and the Notre Dame Journal on Legislation, recognize the value of his work to both scholars and professionals in the field of journalism and mass communications.”

Alexander is currently co-authorshing of a book on the law of news gathering.