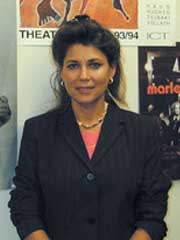 Alter has published two books, Vietnam Protest Theatre in 1996, and Projecting History: Nonfiction German Film 1967-2000, which was published in August. This latest work examines post-war German film production in the period leading up to reunification. Alter’s primary focus is on non-fiction films as they mediate politics and history.

The book discusses the impact of political events-such as the Vietnam War, terrorism and reunification-on German and European filmmakers, and the implications of mass media spectacles for documentary filmmakers. Alter is also completing work on Sound Matters: Acoustics in German Culture, a collection of 15 original essays she co-edited that explore the many ways in which 19th- and 20th-century texts, artists and performers in music, theater, poetry and film have utilized sonic materials to enforce or complicate dominant notions of German cultural and national identity.

Alter is currently working on a collaborative, book-length project with art historian Alexander Alberro on German art during the era of the Berlin Wall. Her interest in non-fiction cinema and her essays on art film and video have also led to another project titled The Cat Who Walks By Himself, a monograph on the French essay filmmaker Chris Marker. She has received research awards from the National Endowment for the Humanities and the Howard Foundation.