Professor of Insect Biochemistry and Microbiology 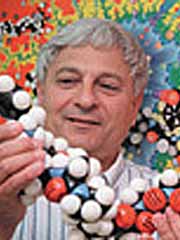 Dov Borovsky has found a way to control the mosquito population. His research focuses on the physiological approaches to the processes that control egg development and digestion in mosquitoes. While searching for an egg-regulating hormone in the ovaries of female mosquitoes, Borovsky discovered the trypsin modulating oostatic factor (TMOF), a hormone that controls, and can therefore block, mosquitoes’ blood digestion.

This discovery enabled Borovsky and his co-workers to create TMOF-producing yeast and chlorella (green algae). The yeast and algae inhibit mosquito larvae’s digestion of blood, causing them to starve to death. Reducing the adult population of female mosquitoes should lead to a reduction in widespread mosquito-borne illnesses such as malaria and encephalitis. In fact, malaria could be reduced by 30 to 50 percent using TMOF. The patent for TMOF is now owned by Insect Biotechnology, Inc., a North Carolina-based company.

Pest control through insect biochemistry has been Borovsky’s area of study since 1975. Borovsky has purified similar hormones in fleshflies, locusts and tobacco bud worms. Richard Jones, dean of research at UF’s Institute of Food and Agricultural Sciences, describes Borovsky’s work as “on the leading edge of new, innovative and technological approaches to protect humanity through the control of important insect pests.”

Borovsky’s research has been funded by the insect biochemistry industry, government agencies such as the National Institutes of Health (NIH), and international organizations such as NATO and the Israel Binational Scientific Foundation.

The NIH presented Borovsky with the Career Development Award from 1979 to 1983. In 1999, he also received the Secretary of Agriculture’s Honor Award and Silver Plow Award. Borovsky has authored three books and more than 100 manuscripts, and has obtained 18 patents for his work.

Borovsky lectures internationally and serves as an adjunct professor at the University of Miami and as a visiting professor at Hebrew University in Jerusalem and Katholieke University of Leuven in Belgium. On the local level, Borovsky spends much of his time advising students, judging public school science fairs and tutoring high school minority students in science.

With studies in Africa, Asia and the Caribbean, Michael Burridge develops his research on a truly international scale. An expert on tickborne diseases, Burridge works with many state, national and international agencies to fund and develop disease-control technologies.