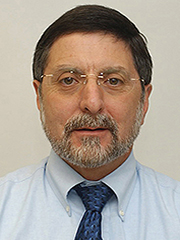 Precision is the difference between killing a tumor and destroying the healthy tissue surrounding it and greater precision has been the life’s work of Frank J. Bova.

The physicist and his colleagues in neurosurgery are innovators in the fields of image-guided surgery and radiosurgery and radiotherapy, which involve aiming a focused, high-dose beam of radiation at tumors and lesions.

Bova and his colleague William A. Friedman invented the LINAC Scalpel in 1986 to treat patients with brain tumors too difficult or too dangerous for conventional surgery. The scalpel, now in use at 70 medical centers worldwide, uses computer modeling to target X-ray beams on brain tumors and lesions and is considered one of the most precise radiosurgical tools in the world.

Bova and his collaborators hold five patents which have generated more than a million dollars in royalty income. “Dr. Bova’s research and development efforts in this field have resulted in multiple, brilliant advances in the field of radiosurgery,” says Friedman, chairman of the Department of Neurological Surgery. “On a daily basis, patients with brain tumors and brain vascular malformations are cured as a result of his work.”

Some of Bova’s most recent work has focused on developing a three-dimensional ultrasound system to more precisely target and treat tumors of the body’s internal organs. Internal organ tumors are sometimes more difficult to treat because the organs aren’t fixed in place and may shift slightly between scanning a tumor and treating it.

The ultrasound system allows the physician to locate exactly the tumor’s position during treatment. Because of more precise locating techniques, a more focused beam of radiation can be used, minimizing damage to surrounding healthy tissue.

In recognition for their body of work, Bova and Friedman were awarded the 2001 Fabrikant Award, the highest honor given by the International Stereotactic Radiosurgery Society. The prize is given to individuals who have made the greatest worldwide contribution to the field of radiosurgery.