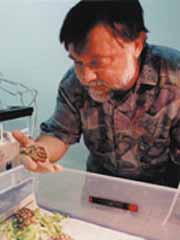 With studies in Africa, Asia and the Caribbean, Michael Burridge develops his research on a truly international scale. An expert on tickborne diseases, Burridge works with many state, national and international agencies to fund and develop disease-control technologies.

Burridge directs the Heartwater Research Project, focusing on the lethal tickborne disease heartwater, which affects wild and domestic cattle, sheep, goats, deer and antelope. Through funding by the U.S. Agency for International Development, the project has established a research laboratory in Zimbabwe and is now completing development of heartwater vaccines for use in sub-Saharan Africa and the Caribbean. The program also conducts epidemiological and economic studies in the South African Development Community (SADC) and trains SADC scientists in molecular biology, immunology and epidemiology. In addition, a quarterly newsletter (The Tick-ler) keeps government and private-sector parties up to date on research and progress in the commercialization of the vaccines and tick decoys developed by the project.

Closer to home, Burridge has discovered that imported reptiles are introducing exotic ticks into Florida. Some of these ticks carry diseases, including heartwater, and their widespread distribution through the expanding trade in live reptiles poses a serious threat to livestock industries and deer populations. Burridge seeks to alleviate this threat by developing safe and effective methods of treating imported reptiles prior to their dissemination.

The results of Burridge’s work include 191 scientific publications, an extensive list of honors for research excellence, and nine domestic and foreign patents. Burridge’s patents include an environmentally friendly pheromone-based tag that attracts and kills ticks on livestock, and the AppliGator(tm), which passively treats domestic and wild animals for parasites. Burridge’s commitment to developing “real-world” applications has made his research program the foremost of its kind in the world.