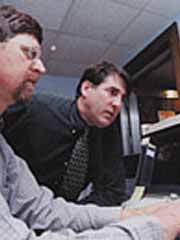 The seas have been charted, the stars have been mapped, and even Mars has been visited by a space probe, yet the activities of the human brain are not fully understood. Bruce Crosson is attempting to solve that mystery through his research in neuropsychology, a science that integrates neurological observations on the brain and nervous system with psychological observations on behavior and the mind.

Much of Crosson’s research has dealt with functional magnetic resonance imaging (fMRI) technology. Whereas traditional MRI scans map out the brain’s structure, fMRI scans record areas of activity in the brain. Not only does fMRI provide images that indicate the specific brain parts used in certain controlled tasks, it also allows changes in brain use to be charted during rehabilitation. Regarding fMRI technology, Crosson says, “We think this will allow us to develop much better treatments because we will be able to see if our ideas about what is happening in the brain are correct.”

Crosson’s research in rehabilitation includes a study in the treatment of inattention and attention in aphasia, the inability to speak or to understand language after brain damage. This study, part of a larger study on the treatment of aphasia and related disorders, is funded by a $5.3 million grant the National Institutes of Health (NIH) and a $157,612 grant from the Genesis Health Foundation, and has focused mainly on patients who have suffered a stroke. Using fMRI technology, Crosson has determined that rehabilitation of the right hemisphere of the brain could occur in stroke patients with continual stimulation on the left side of their body.

“Evidence has shown that some aphasic patients improve communication when simple manipulations of attention are performed,” Crosson explains. “We want to explore the application of such findings to the treatment of aphasia to improve those patients’ ability to communicate.”

Along with his study of aphasia, Crosson is also involved in research on cognitive changes in presymptomatic Parkinson’s disease. He has another project to study the medial frontal cortex in intentional aspects of language. It uses fMRI technology to learn how medial frontal structures contribute to the initiation of language.

Not only is Crosson a cutting-edge researcher, but he is also an often-published expert, serving on the editorial boards of such prestigious journals as The Clinical Neuropsychologist, Neuropsychology and Journal of the International Neuropsychological Society. Along with numerous journal articles and book chapters, Crosson has also published the textbook Subcortical Functions in Language and Memory. His research of the semantic knowledge of the human brain is soon to be published in a paper titled “Brain and Cognition.”