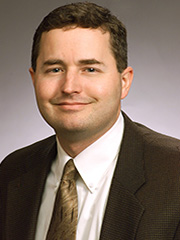 Richard B. Dickinson applies engineering principles to study the behavior of living cells. He and his colleagues use a combination of mathematical modeling and quantitative experimentation, together with the tools of molecular cell biology, to better understand the relationship between cell function and the physical and molecular properties of cells and their surroundings.

This understanding is relevant to several biotechnological, biomedical, biomaterial and pharmaceutical applications. This field is often called cellular bioengineering or cellular engineering. One major area of focus is cell adhesion, which is relevant to applications such as the design of biomaterials for biomedical implants, cell carriers for bioreactors in the bioprocessing industry, and filters to remove microorganisms in water purification.

“Our goal is to develop models that can predict the probability and strength of adhesion as a function of measurable molecular and physical properties of the cell and substratum,” Dickinson says.

Another major focus is cell migration, which is relevant to a number of physiological processes, such as wound healing and inflammation, as well as to pathological processes such as tumor cell metastasis. Cell migration is also involved in the proper function of bioartificial devices in tissue engineering applications.

The impact of this work is evident from the opinions of other experts in the field. A review article in Current Opinions in Cell Biology described Dickinson’s ideas on actin-based cell motility as “ingenious,” an “important conceptual advance,” and “an important breakthrough for the whole field of actin assembly.”

Other reviewers have described Dickinson’s recent publications in this area as offering “a fascinating, and necessary, new alternative model for membrane force generation by actin polymers” and as an “outstanding contribution to the field” that “will play an important role in advancing the field of cell motility.”