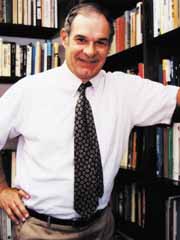 From the Ku Klux Klan to the Reform Party, political activist movements – no matter how controversial – have been part of the social fabric of the United States. A historian of U.S. political culture, Ronald Formisano has studied political parties and social movements in both the 19th and 20th centuries. Throughout his career, he has tried to understand the roots of civil disobedience.

Formisano’s latest project is a composite study that constructs a historical relationship among U.S. populist movements from the early national period through the 1990s – taking everything from the American Revolution and Shay’s Rebellion to Jesse Jackson and Jesse Ventura into account. “My current research builds upon many parts of my earlier work, but transcends my previous focus on particular movements,” Formisano says.

Though primarily recognized as a leader in early 19th and 20th century social and political history, Formisano’s publications also include important post-World War II case studies. The reactionary, anti-busing/anti-school desegregation movement of the 1970s is one such populist movement studied by Formisano.

Boston Against Busing searches beyond the scope of race as the sole catalyst of social conflict by considering several explanatory dimensions – turf, class and ethnicity – in its study of social interaction. In this book, Formisano draws on oral histories and interviews to sketch the perspectives and tactics of ethnic whites who opposed the injunction for school integration in Boston.

Formisano has scripted our country’s political dynamic by publishing four books and numerous scholarly articles. Deconstructing American politics through publication “promotes political awareness and makes better citizens,” says Formisano. In 1999, The Journal of American History published Formisano’s “The Party Period Revisited,” which dissects modes of citizen participation in the 19th century political sphere. Next year, The Journal of Interdisciplinary History will publish “The Concept of Political Culture,” an essay that continues Formisano’s pattern of cross-disciplinary scholarship.

Along with an impressive list of publishing endeavors, Formisano is editing a book series with Johns Hopkins University Press and has been chosen to deliver keynote lectures at both Oxford and Cambridge universities. He was awarded a departmental graduate teaching award in 1995, has received two fellowships from the Fulbright program and has held the Fulbright Chair of Political Science at the University of Bologna, Italy since 1994.