Jamie Ellis, professor in UF’s Department of Entomology and Nematology, is a beekeeper-scientist, using a network of scientific disciplines as a lens to zoom in on bee biology, ecology and behavior. In his role as founding director of the Honey Bee Research and Extension Lab, also known as HBREL, in UF’s Institute of Food and Agricultural Science, Ellis oversees a team of more than 20 researchers, students and bee experts. The facility, a $4.5-million teaching, extension and research space completed in 2018, features a hive observation room, a honey processing facility and a collection of hives for teaching and research.

Ellis and his team have a shared mission to support Florida’s robust beekeeping community, he said. Redoubled extension efforts – including the Master Beekeeper Program and Bee College, a two-day training program for bee enthusiasts of all levels – have helped more than triple the number of hives in the state and helped grow the number of beekeepers from 900 to over 4,500.

“It’s our job as extension specialists to digest the research that’s available not only from our lab but from other labs, and give it back to the beekeepers who can use it to make management decisions that lead to healthy colonies,” said Ellis, also co-host of the new HBREL talk show, “Two Bees in a Podcast.”

Ellis, who earned his bachelor’s degree in biology from the University of Georgia and his Ph.D. in entomology from Rhodes University in South Africa, recalls his curiosity about bees taking shape as early as kindergarten. He began keeping bees at 12, and by the time the first empty hive arrived at his doorstep, Ellis had been patiently reading up on beekeeping for nearly four years.

His current projects include identifying key genetic characteristics that can be used to distinguish honey bee species and finding new ways for bees to contribute to Florida’s crop pollination. Ellis, who has won more than $5 million in grants in his career, is also helping develop new strategies for combatting Varroa destructor, a parasitic mite whose invasion can lead to colony collapse as they feed on bee fat and accelerate the spread of viruses.

But studying the mite has remained a challenge, Ellis said, because scientists have yet to develop a reliable way to raise Varroa in a lab. He and his team – who were the first to optimize indoor honey bee rearing – are currently attempting to raise in-house Varroa colonies, which would allow for year-round research to illuminate new management strategies for the pest, Ellis said.

“I’m almost an obsessive problem-solver and, in many ways, easily amazed,” said Ellis, who arrived at UF in 2006. “Life is fascinating to me, and every discovery that my team and I make constantly amazes me – no matter how seemingly small it is. And that amazement makes me want to know more.”

He added that tight partnerships among Florida’s beekeeping community, farm bureau, Department of Agriculture and UF have only strengthened his research program.

“When I say ‘team,’ it’s my colleagues here at UF who make this honey bee work possible,” he said. “I’m the one being awarded, but this is all accomplished by the hard work of graduate students, technicians, postdocs, staff, faculty, collaborators – today’s problems are complex, and complex problems have to be addressed by people with diverse backgrounds, interests and knowledge.”

He was featured in the spring 2019 issue of Explore magazine. 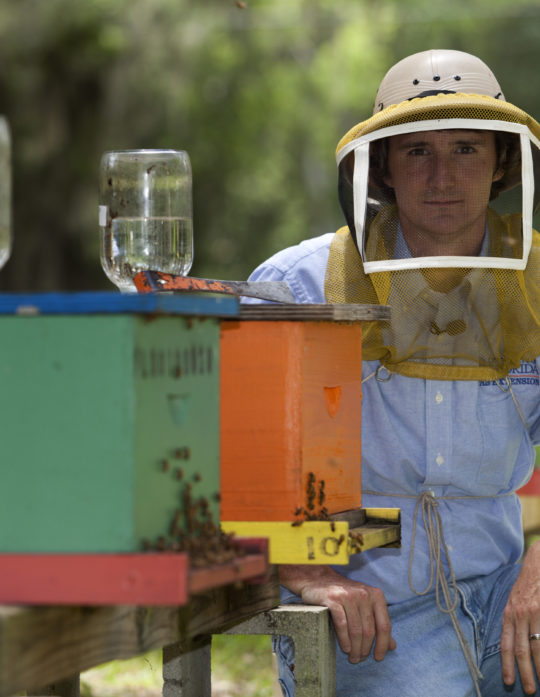