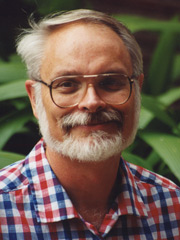 Botany Professor Walter Judd says the emergence of new technologies to classify plants makes this a very exciting time in the field of botany.

“In the past, when we named and grouped plants, we relied heavily on morphology (a plant’s structural and physical characteristics) and chemical analysis,” Judd says. “However, with the recent advent of phylogentic analysis of DNA data, we are now able to construct and test our evolutionary hypotheses and integrate these with morphology. As a result, plant taxonomy, or systematics, has become more objective and scientific.”

Judd is contributing morphological data for use with DNA sequence technology in the collaborative “Tree of Life” project to solve some of the remaining questions about the angiosperms, or flowering plants. In addition, he is focusing on two large angiosperm families – Melastomataceae (meadow-beauty family) and Ericaceae (blueberry family). His work has clarified generic relationships in both families and he has recently published a monograph of Miconia section and Chaenopleura in the Greater Antilles.

Phylogenetic analysis of molecular and morphological data has become such a powerful tool, Judd says, “we’ve probably learned more about the evolutionary relationships of plants in the last 10 years than in the previous 100.”

Judd says that if botanists can figure out the evolutionary relationships of the world’s organisms “then our classifications can have great predictive powers.”

“Say somebody finds a secondary chemical compound that has medicinal value,” Judd says. “When they find it in one species, they don’t search for further versions of it at random. They’ll look in the same family or genus. So these [more accurate] classifications matter.”

Judd says that because of the rapid changes in plant taxonomy, there are few accurate texts.

“So I and several other botanists decided to write a textbook called Plant Systematics: A Phylogenetic Approach, and it is the first text that uses the approach of basing the names of plants on evolutionary (or phylogenetic) hypotheses,” Judd says. “This book is now the most widely used text in the field, as we hope to have an impact on the way plant systematics is being taught.”