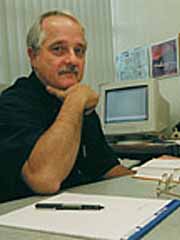 Ramon Littell’s research focuses on applying statistics to agricultural and natural resource projects. He is nationally and internationally renowned for his development of models that combine statistical theory and methodology to accommodate multiple sources of random variation in data. Littell explains that “mixed models have application in all areas of scientific research. The methods are needed to obtain efficient and valid statistical interpretation of data.”

Littell has participated in research that has brought more than $1.5 million to UF. Much of this research has dealt with the development and application of mixed models using the SAS system of computer software, a topic on which he has authored two books and is highly noted as an authority.

“My interest has been in implementing and making useful some of the classical (statistical) theory, and identifying important elements and guidelines for using the methodology,” says Littell. Beyond applying it in his own research, Littell has made the methodology of mixed models accessible and comprehensive to other scientists in various fields.

Littell designed the experiment and analyzed the data in a study of phospho-gypsum (PG), a by-product of phosphate mining in Florida. The information gained from Littell’s research on PG, which has beneficial properties as a soil amendment but contains radioactive material, will allow future scientists and policymakers to determine safe levels of PG exposure to water, soil and air. Littell has also planned and directed many experiments regarding animal nutrition, providing animal producers with vital data on diet formulation and influencing the manner in which nutrition scientists conduct bioavailablity research.

Littell’s peers have consistently recognized him as an outstanding statistician. In 1994, he received the Distinguished Achievement Medal from the American Statistical Association’s Section on Statistics and the Environment. He is an associate editor of The Journal of Agricultural, Biological, and Environmental Statistics as well as a fellow of the American Statistical Association. In 1998 Littell’s 30 years of service to UF were recognized with the Professorial Excellence Award.

Ronald Randles, former chair of the Department of Statistics says: “Dr. Littell is an outstanding scholar and researcher in statistical methods for agriculture.”