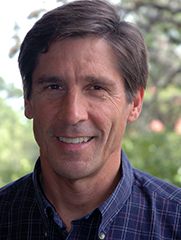 Rivers and streams in north Florida have a curious habit of disappearing into the ground, only to reemerge elsewhere, a result of the porous rock formations that lie not far beneath the ground.

Jon Martin’s research has found that much of the water that feeds the springs in the region flows through tiny pores in the rocks, not large underwater conduits.

The research has a couple of important implications, Martin says. One is that much of the water may come from a large area around the springs, meaning it could carry pollution that had been in the groundwater for some time or originated from another region. The findings apply not only in Florida, but also in other states in the Southeast.

“The real problem is how long does the water and associated pollutants remain below the surface, and then where does it go?” Martin says. “The pollution can get in the groundwater and be there for tens of years or hundreds of years.”

Martin’s research contrasts the results of most other scientific studies of karst aquifers showing the wall rock of underwater conduits to be far less permeable.

Those studies focused on the western Appalachians, which have far older karst systems, Martin says.

“Those places have much older rocks, so much of the porosity has been filled up,” he says. “In Florida and other parts of the Southeast such as South Carolina and Georgia, the karst systems are much younger, so that hasn’t happened yet.”

Martin used automated equipment to make repeated temperature readings at the Santa Fe River’s sink and rise along the Alachua-Columbia county line, as well as at a lake between the two.