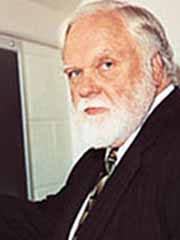 John H. Moore is currently chair of the Human Genome Diversity Project in North America, a research effort funded by the National Science Foundation and the MacArthur Foundation to organize a global sample of human genes collected to illuminate the history of the human species over the last 200,000 years. Special attention will be paid to determining the routes by which humans migrated and how they adapted to the climates and environments of the different continents. Combined with fossil and archaeological evidence, these global genetics data, called the World Collection of Cell Lines, will provide the means for evaluating various theories about an African homeland, about “mitochondrial Eve” and a host of other hypotheses concerning human origins that appear on a weekly basis in newspapers and magazines, as well as in scholarly journals.

Moore began his career as a field anthropologist, investigating the health, fertility, kinship and social structure of Native Americans on reservations in Oklahoma, Wyoming and Montana. He has published three books on these subjects, including his popular book, The Cheyenne. He has written 15 books and monographs and nearly a hundred other articles, book chapters and reviews. His current field interest is the Mvskoke Creek and Seminole Indian peoples of Oklahoma and Florida, the subject of a book to be titled The Mvskoke Tribal Towns. He publishes regularly on theories of human evolution and is the proponent of ethnogenetic hypotheses, which emphasize the extent to which human societies and cultures are derived from many sources, rather than having a single mother society. He is an outspoken critic of racial theories and serves as a consultant to the U.S. Bureau of the Census on the use of racial categories in census questionnaires.