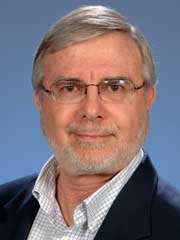 Looking back over millions, and sometimes billions, of years, Paul Mueller uses ancient rocks to catch a glimpse of what the world used to be, and how it has changed since then.

Mueller’s research focus is on how the Earth’s crust has shifted to form the seven continents from the enormous supercontinents of the past. Two of his current projects investigate the continental collisions that formed Laurentia, the 1.7-billion-year-old supercontinent that was the basis of modern-day North America and Greenland. Another project in Namibia will explore the origins of Gondwanaland, the 600-million-year-old supercontinent that included most of the landmasses in the Southern Hemisphere.

Mueller has identified some of the oldest rocks in North America, including grains of zircon, which were dated at four billion years. Zircon, a tiny mineral resembling a diamond, houses radioactive Uranium atoms that can be used for determining age. Mueller and his group have also identified crust that mimics the Earth’s composition 3.5 billion years ago.

Mueller has been the chair of UF’s geological sciences department for the past 12 years. He is also director of the Center for Isotope Geoscience, which houses the Inductively Coupled Plasma Mass Spectrometry (ICP-MS) laboratory. This laboratory is used by faculty and students all across campus and has attracted both national and international visitors.

The development of the ICP lab in the past five years has been critical for age determination using Uranium decay in zircon. Mueller’s lab was also the first in the country to publish data about a specific technique using lasers for measuring zircon’s other important decay system based upon the decay of the radioactive trace element Lutetium. The techniques that originated from his lab culminated in the funding of the Gondwanaland project and a project to study North America’s oldest record of crustal evolution preserved in ancient rocks of Wyoming and Montana.