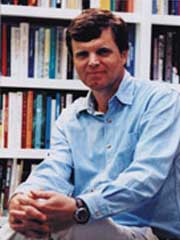 From 1930 to 1945, American movie theaters averaged 80 million in attendance each week, a sum totaling more than half the population at the time.

But English Professor Robert Ray says this statistic only begins to convey the extraordinary hold movies have had on the American imagination, or the extent to which Classic Hollywood has influenced today’s culture.

Ray is a leader in the field of film studies whose research focuses on developing new methods for studying and appreciating Hollywood cinema. He has written numerous highly regarded books and essays that have become standard reference texts in cinema classes throughout the country. He believes that “in studying the movies of Hollywood’s classic period, we are studying the single most important body of films in cinema history, the one that set the terms by which all movies, made before or after, would be seen.”

His first book, A Certain Tendency of the Hollywood Cinema, 1930-1980, which was published in 1985 and has sold almost 14,000 copies, is a survey of the Classic Hollywood period and discusses several movies from the era. According to James Naremore, Chancellor’s Professor of English, Comparative Literature and Film Studies at Indiana University, this book “remains the best one-volume discussion of Hollywood in the sound era, and its arguments about the ideological significance of American popular fiction are as relevant as ever.”

Ray’s next book, The Avant-Garde Meets Andy Hardy (1995), stemmed from his dissatisfaction with the state of film studies at the time. Seeking to develop alternative ways of thinking and writing about the movies, Ray examined the Hollywood system from the perspective of its most average films. He reveals that even the Andy Hardy movies – a routine product of the Hollywood studio system – were as enchanting as the bigger movie productions of the time.

Ray is currently at work on a book tentatively titled Four Classic Hollywood Films, in which he proposes a new approach to film study based on close reading and examination of the smallest details in a movie. This approach involves going back to the early days of film criticism in order to explore methods of analysis that are no longer used.