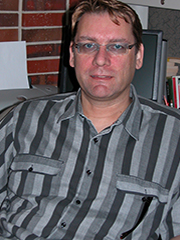 All the world’s a stage, wrote Shakepeare, and both of Ralf Remshardt’s feet are firmly planted in that world. Remshardt, a leading member of the academic theatre community, remains one of the rare scholars who both writes about theater and produces it.

“I have always approached my production work both as a practical and an intellectual challenge and there are frequent intersections between my scholarly work and my stage work,” says Remshardt.

In his 12 years at the University of Florida, Remshardt has directed 10 productions (including one he adapted from a novel, one he translated from German, and one he directed in another state); published two dictionary entries; reviewed 10 books and performances, written six full-length articles or book chapters in both English and German, and published his first book, Staging the Savage God: The Grotesque in Performance.

The grotesque, which puts the human order out of joint and may place a human head on a horse’s neck, or turn a man into an insect as in Kafka’s writing, enjoys a long theatrical history. Remshardt’s book, which incorporates history, psychology and philosophy, examines theater’s connection to the grotesque and the actual staging of such grotesque theater.

Reviewer Anthony Kubiak from UC Irvine writes that the book is “a unique, exhaustive, and unparalleled study, probably the best scholarship I have had the honor to review for publication.”

Remshardt is now extending his reach into cinema, both writing about the transition from theater to cinema for his next book project and, with colleague Tony Mata, planning a documentary film about the Latino theatre in New York.