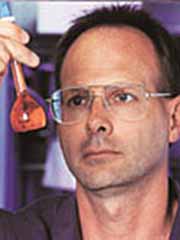 John R. Reynolds is an international leader in the field of electrically conducting and electroactive conjugated polymers. In contrast to typical insulating plastics, these organic materials exhibit optical and electrical properties that are much like those of metals and semiconductors.

Reynolds’ research is focused on the development of new polymers by manipulating their fundamental organic structure in order to control their ultimate properties.

Using electron-rich monomers as building blocks, his work has led to polymers that are the most easily converted into their electrically conducting form.

Numerous applications exist for these “electrically conducting plastics” in many industries, bringing strong corporate and government interest, and funding, to the research effort. These include transparent conducting films for static-charge dissipation, which is of importance to the electronics and photographic film industry; electrode materials in flexible light-emitting diodes and charge storage capacitors; and conducting pathways on printed circuit boards. But these polymers have unique possibilities that go far beyond their static electrical properties as they can be switched between conducting and insulating forms in a controlled manner.

Reynolds’ research has exploited this in a number of ways. For example, he and his research group are recognized for developing the most versatile electrochromic (color changing with electric charge) polymers which are potentially useful in switchable or “smart” windows and large area displays (e.g., signs and advertisements).