Professor of Microbiology and Cell Sciences 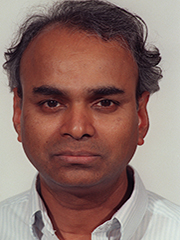 “Increasing the amount of ethanol produced to meet the transportation needs of the country would place a significant demand on corn, a food and feed source,” says Shanmugam. “Lignocellulosic biomass, such as crop residues and energy crops, can serve as an alternate, inexpensive, feedstock for ethanol production without impacting the cost of corn.”

Shanmugam plays a crucial role in the UF Florida Center for Renewable Chemicals and Fuels, where he has led the effort to genetically engineer bacteria for more efficient hydrogen production. He is also involved in making microbial fuel cells for electricity generation.

“Professor Shanmugam’s knowledge of microbial physiology has been instrumental in the FCRCF’s efforts to convert lignocellulose to ethanol,” says Eric W. Triplett, professor and chair of the Department of Microbiology and Cell Science. “This work has led to significant grant support, important published works and intellectual property. This work will one day facilitate the conversion of large amounts of agricultural wastes in Florida to ethanol for transportation fuel.”

Shanmugan has been principal or co-principal investigator on more than $6 million in grant support from the U.S. Department of Energy and other agencies over the last five years.