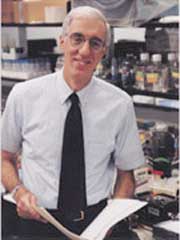 Some of the most stunning advances in science and medicine have come from the discoveries of basic research, says David Silverman, whose fundamental research on the properties of enzymes may be just such a catalyst for future scientific discoveries. He has received 27 years of continuous funding from the National Institutes of Health (NIH)

Silverman’s lab established the upper limits by which very fast enzymes can deliver protons to solution.

His lab studies two examples of very rapid and efficient enzymes – carbonic anhydrase and superoxide dismutase – that govern cellular levels of either carbon dioxide or activated oxygen in the cells of humans, animals and plants, and that are important in many physiologic processes. Silverman’s interest is in the causes and limits of these enzymes’ efficiency. If we can overcome these limitations, he explains, we could produce enzymes that are even more efficient. Silverman is motivated by the need in the community of biological scientists to understand the steps of rapid and efficient enzymic reactions.

Silverman’s lab has attracted considerable attention as the first lab to apply the Marcus Rate Theory to an enzyme. Rudolph Marcus received the 1992 Nobel Prize in chemistry for showing how electrons and protons are transferred between two smaller molecules in solution. Silverman’s application of Marcus’ theory to the properties of proton transfer in the enzyme carbonic anhydrase is creative, original and very well received, according to a colleague.

Silverman is in high demand as a seminar speaker and serves as an organizer of many prominent scientific meetings.

Silverman is also dedicated to providing research training to undergraduate and graduate students. A member of the department of pharmacology for 28 years, he was promoted to distinguished professor in 1999. He has twice been chosen as Teacher of the Year in the basic sciences of the College of Medicine, and has also served as Associate Dean for Academic Affairs and Sponsored Programs in the College of Medicine.