Professor and Curator of Molecular Systematics and Evolutionary Genetics 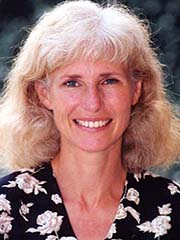 Why the flower? For millions of years plants happily reproduced without them. The origins and subsequent success of the flower forms a major part of Pamela Soltis’ research.

Soltis’ group, which she co-leads with her husband Doug, has created a flowering tree of life, linking the many families of flowering plants and providing a history of this largest of all plant groups – which encompasses almost all the economically important species.

A curator in the Florida Museum of Natural History and an associate editor of the top two journals in her field, Soltis says that such projects require creating connections across disciplines, from paleobotany to mathematics and from molecular biology to botany.

Her group’s work has set the informational groundwork for a blossoming of studies in ecology and evolution. As well, Soltis continues to study plant speciation, particularly polyploidy, where multiple copies of a set of chromosomes are produced. Such polyploid plants cannot successfully breed with otherwise identical plants that have the original and lesser number of chromosomes.

“We have observed rapid and spectacular changes in gene content in naturally occurring polyploid species within a small number of generations after their formations,” says Soltis.

Given that many plants and animals are now known to be polyploid, Soltis says, these dramatic genetic changes that occur early in the history of a polyploidy plant species may provide clues to the origin and maintenance of genetic variation in such populations, and the creation of new species.

The genetic events associated with polyploidy have led Soltis and her team to propose that polyploidy may have been a catalyst for the origin and diversification of flowering plants.