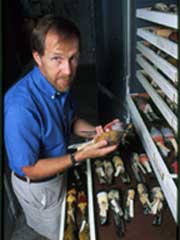 David Steadman’s research on the biogeography of birds in Oceania and the West Indies has revolutionized concepts about endemic bird life on tropical islands and the role that both modern and prehistoric humans have played in its extinction.

Steadman’s international fieldwork has augmented the Florida Museum of Natural History’s ornithology collections, which rank among the world’s largest in numbers of species and geographic regions represented.

Since 1995, Steadman has been supported with almost $500,000 in external funding, including the largest research grant ever awarded to a faculty member at the Florida Museum of Natural History – $349,890 from the National Science Foundation. This grant funded research on prehistoric and modern changes in the distribution of birds in the Polynesian island groups of Fiji, Tonga and Samoa.

In addition, Steadman has received funding from the National Geographic Society for field studies of birds on other islands in the Pacific and the Caribbean. Much of this research involves exploring very remote islands that have seldom, if ever, been visited by any ornithologist. “There are many remote, uninhabited islands in the tropical Pacific that are just waiting to be explored by scientists,” Steadman says.

Steadman’s research has made him one of the most prolific authors at the Florida Museum of Natural History. During the past five years alone, he has published more than 35 articles in such prestigious journals as Science and Proceedings of the National Academy of Sciences.

Last July, Steadman guided a museum-sponsored trip to the Galapagos Islands, providing participants with an opportunity to see spectacular wildlife in one of the world’s least disturbed island groups.